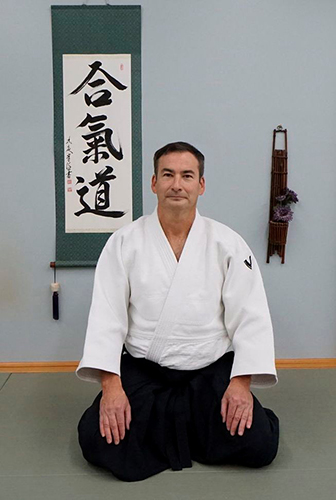 In 2007, Derek Sensei moved to Anchorage, Alaska. He is currently a student of Andrew Sato Shihan (Nanadan, 7th degree black belt) and is affiliated with his organization, the Aikido World Alliance (AWA). Derek Sensei also holds the rank of Shodan in Hojutsu Ryu, training with Roy Uttech (4th Dan) and Steve McDaniel (4th Dan) senseis in Anchorage. Additionally, Derek Sensei trains in Iaido with Masayusa Ando Sensei (7th Dan), also in Anchorage. In the spring of 2015, he and his wife (Rachelle Reynolds Sensei) opened Aikido of Alaska.

Currently holds the rank of Yondan (4th degree black belt) in Aikido. She began her training while in California at Chushinkan Dojo with James Nakayama Sensei in 1990. While in college, she continued her training with Ace Atkinson Sensei at University of California, Riverside then resumed with Nakayama Sensei upon graduation. Under the guidance of Fumio Toyoda Shihan (Rokudan) and the Aikido Association of America, Rachelle Sensei received her Shodan in 1999. While training with Nayakama Sensei, she had teaching responsibilities at the dojo. Rachelle Sensei was promoted to Nidan in 2005. To broaden her experience, she also trained with Matsuoka Sensei at Ikazuchi Dojo.

Additionally, she trained in Iaido while at Chushinkan Dojo. Rachelle Sensei taught Aikido at California State University, Fullerton in 2005-2006. In 2008, Rachelle Sensei moved to Anchorage, Alaska. She is currently a student of Andrew Sato Sensei (Nanadan) and is affiliated with the Aikido World Alliance organization. She was awarded the rank of Sandan in 2014. In the spring of 2015, she and Derek Sensei opened Aikido of Alaska.

Classes
What is Aikido